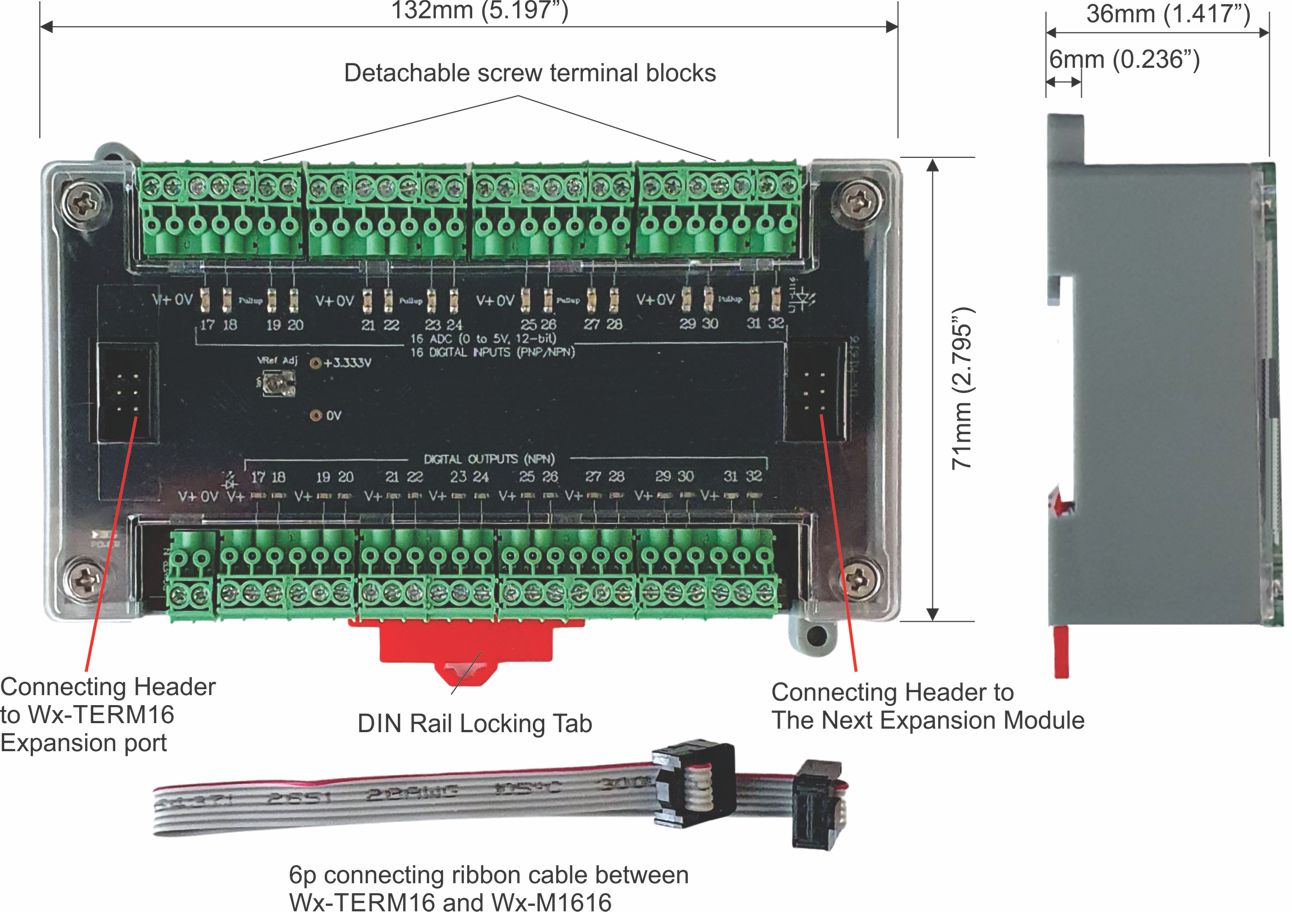 A Wx-M1616 is a DIN-rail mountable expansion module that adds additional digital inputs, analog inputs and digital outputs to a Wx100 PLC system.

Wx-M1616 is meant to be connected to the 6p expansion headers located at the right-end of the Wx-TERM16 terminal module using the 6p connecting ribbon cable included with your new Wx-M1616 . Wx-M1616 deploys detachable screw terminals to enable quick field wiring.  The following are the I/O specifications:

Any or all of the 16 digital input terminals of a Wx-M1616 may also be used as 0-5V analog inputs, enabling highly flexible I/O configuration. To use an input terminal as an analog input you simply wire a 0-5V analog signal to it and the i-TRiLOGI TBASIC custom function simply call the function ADC(n) where n is the input number.  The firmware will automatically configure these inputs to become analog inputs. For example, if you want to use input 17,18,19,20 as analog input then simply call the function ADC(17) to ADC(20) and the firmware will configure these 4 inputs as analog inputs.

As shown in Figure 1, the Wx-M1616 module also has an expansion header to the right of the module which allows it to be cascaded to  another Wx-M1616. In fact, up to 4 pieces of Wx-M1616 can be cascaded in a chain. Note: Each Wx-M1616 must be configured for a different address using DIP switches as explained in the Section 8 in this manual. 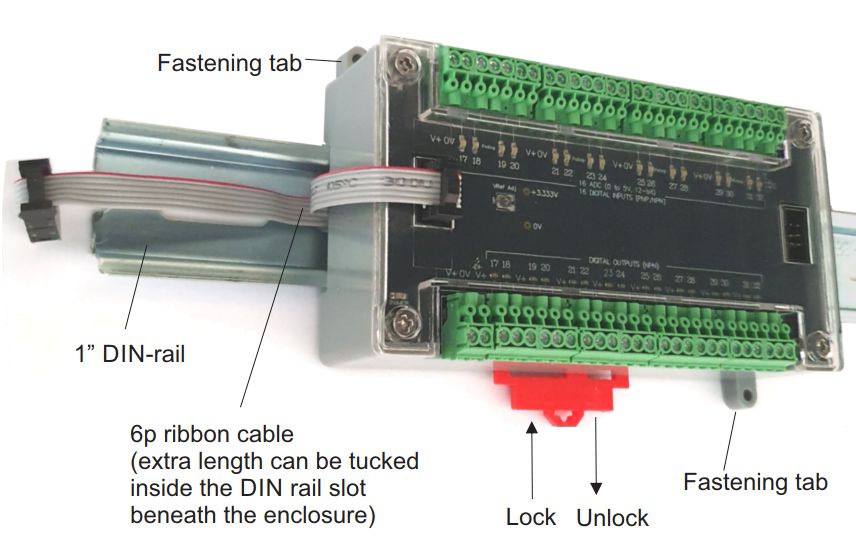 a) Install on DIN Rail

It is really simple to mount the Wx-M1616 on a DIN-rail – simply pull down the “DIN-Rail Locking Tab” down until it clicks and stay in place. Next hook the Wx-M1616 over a 1″ DIN rail, and push the locking tab back into its original position and the enclosure will stay in place on the DIN rail.

The enclosure may still slide along the DIN rail to make it easy to adjust its location. If you need to lock the enclosure in place you can add a 6-32 x  1″ (or M3.5 x 25mm) screw to one of the fastening tabs to add some friction against the back wall of the control panel.

b) Fasten with Screws

There are two fastening tabs on the upper and lower side of the Wx-M1616 body enclosure. Simply drill a pilot hole through the fastening tab and use two pieces of M3 or 1/8″ diameter self-tapping screws to fasten the Wx-M1616 enclosure to the control panel. 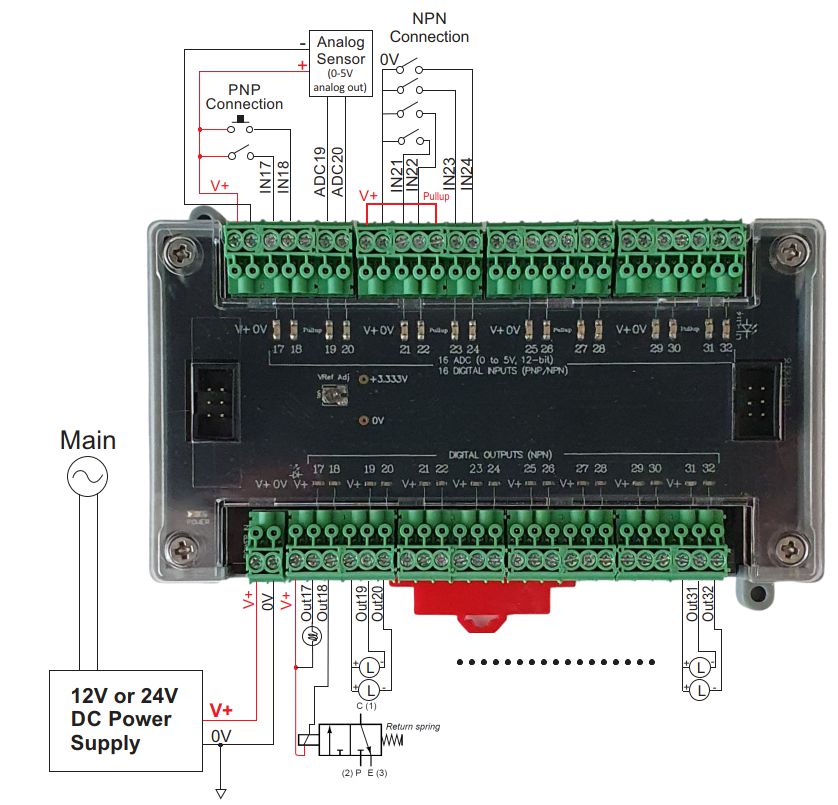 Wx-M1616 can be powered by the same 12 to 24V DC power supply that is powering the Wx100 PLC and the Wx-TERM16 module. Alternatively, choose a regulated switching or linear power supply between 12V to 24VDC (+/- 5% ripple) and 2A to 5A current capacity.

To simplify field wiring, the power input (V+ and 0V) that Wx-M1616 receives via its “POWER IN” connectors are routed by the Wx-M1616 PCB to the entire input terminal section.

Each digital input has a green LED indicator which lights up when the input is turned ON. Connecting to a mechanical switch or push button is extremely simple – it only needs to short the V+ to the IN terminal as shown in (a) below. PNP sensors that are powered from 12 to 24V DC is just as easily connected as shown as (b) in Figure 1.5 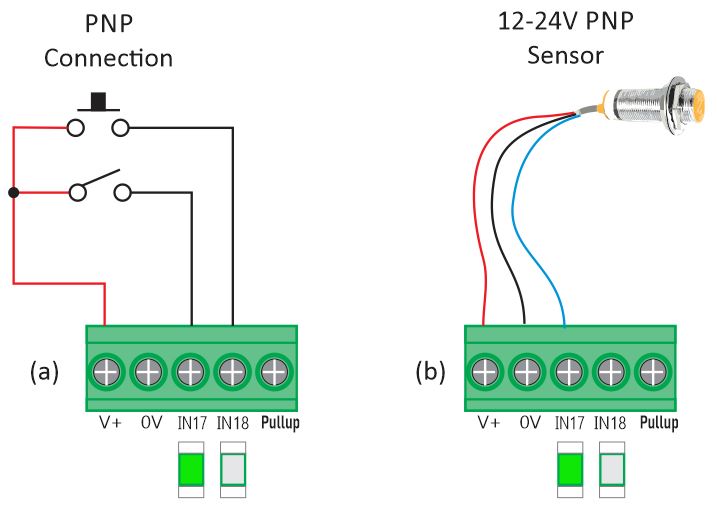 NPN (current sink) sensors work in reverse to PNP sensors in that when it turns ON it will want to pull the input to low voltage, whereas when it turns ‘OFF’ it will either leave the input floating or pull it up to the power supply voltage level.

Fortunately, you don’t have to think in term of negative logic when you write the PLC program. By running the special INVERT_INPUTS command once during initialization of the PLC program, you can force the PLC firmware to invert the logic of specified inputs before processing. This includes the digital I/O scan as well as all interrupt-based input functions such as pulse monitoring and high-speed counter operation:

All digital outputs are directly programmable in Ladder Logic as well as in TBASIC custom functions. Some programming examples are detailed in the manual:

To simplify field wiring, the V+ power input that Wx-M1616 receives via its “POWER IN” connector is routed by the Wx-M1616 PCB to the output terminal section. This allows user to very easily wire to a typical output load. For example, the following shows how to easily use it to turn on a 12V lamp load.

The load can really be any kind of DC load as long as the working load voltage is  <= 30VDC and the load current is < 2A continuous. It could be as small as a LED indicator lamp, a solenoid valve, the coil of a 12 or 24V relay or contactor, or a DC motor.

All digital outputs are directly programmable in Ladder Logic as well as in TBASIC custom functions. Some programming examples are detailed in the manual: 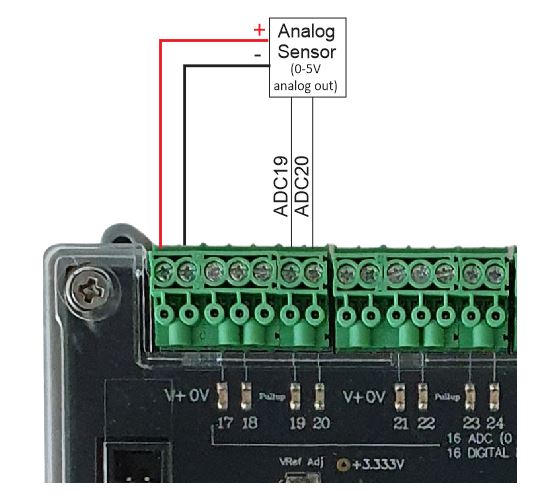 Upon power on or after a software reset, all input on an Wx-M1616 are configured as digital inputs by default.

As soon as the TBASIC command ADC(n) is run, the input channel #n would be configured by the PLC’s firmware as an analog input. For example, if you call the function ADC(17), ADC(23) then input terminal #17 and #23 will automatically becomes analog input and return an analog reading between 0-4095 corresponding to input voltage of 0 to 5VDC.

More programming and application examples on using the analog input with Wx100 can be found in Chapter 5 of Wx100 User’s Manual.

With addition of simple resistors you can easily convert 0-20mA or 0-10V signal to 0 to 5V which can then be measured by the Wx-M1616 analog inputs. Please refer to the following diagrams:

Many 4-20mA analog sensors only have two wire connections and are designed to be powered by the 4-20mA output current that flows through it. These types of sensors can be interfaced easily to the 0-5V analog inputs of the PLC as shown in the following diagram:

The sensor output will be converted to a 1-5V analog voltage and can be read by the PLC using the ADC(n) statement, which will return readings of between 820 and 4092. 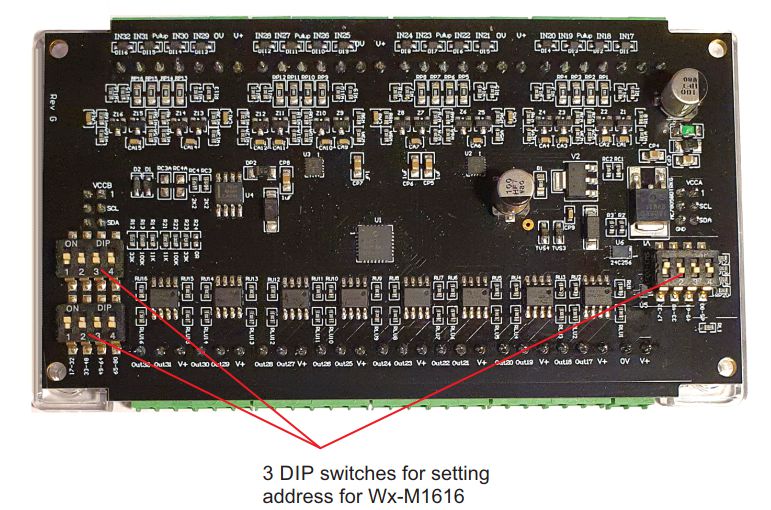 Once you have set the DIP switches, peel from the I/O label sheet (included in the Wx-M1616 package as shown below) the I/O number labels that correspond to the DIP switches setting and paste over the default I/O numbers (17 to 32) on the PCB so that the correct I/O number is visible on the PCB once they are assembled back to the enclosure. We provide 2 sets of I/O labels so you will have a spare set of I/O for flexibility.